Edward Rolle IV (Carol City), Marc Jeanis(Taravella) and Chad Boyd (Coral Springs High) were the top performers in the STEALTH CAMP SERIES, 2015 COLLEGE SHOWCASE COMBINE presented by Keeping Dreams Alive Foundation. Rolle had the longest broadjump 10’2″, Jeanis had the fastest 40 with a 4.5 and Boyd had the fastest in the shuttle at 4.18. 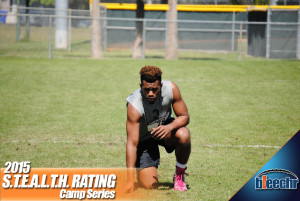 The 2015 COLLEGE SHOWCASE COMBINE kicked off their inaugural STEALTH Camp Series Saturday, February 14th, 2015, at McArthur High School in Hollywood, FL. This event replaces the NCRA Senior College Showcase. In this event seniors were still spotlighted, but underclassmen were allowed to participate as well. 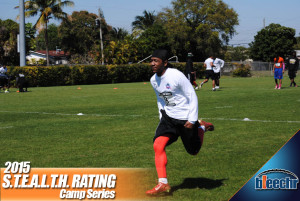 The 3 hour Combine, 1 on 1’s and 2 on 2’s were live streamed through HSPN SPORTS hspnsports.com and carried LIVE onSTEALTH Rating stealthrating.com/live-broadcast.

The event hosted 64 student athletes from Dade and Broward Counties and it was a huge success. The combine included a 30 minute classroom mentoring session before the combine session which included the patent pending Recruiting Learning Management System ‘Playing the Recruiting Game‘ playingtherecruitinggame.com as well as an introduction to the student athlete rating system, a patent pending mathimatical algortiym that rates them based on Character, Grades/Test Scores and Work Ethic/Performance stealthrating.com.

»
This popup will close in: